What is Indentured Servitude?

This exhibit offers a glimpse of the story of migration to Colonial British North America. While the data from the Record of Indentures only covers a three-year period, it has the potential to tell thousands of stories, and reveal new knowledge about migration, labor, and exploitation. Many of the individuals recorded in the Record of Indentures have been lost to history. We hope this resource will open the path for their stories to be told.

Because visitors to the exhibit may not be familiar with the concept or details of indentured servitude in this time and place, we’ve provided a brief overview of frequently asked questions along with other suggested resources.

Find out more below: 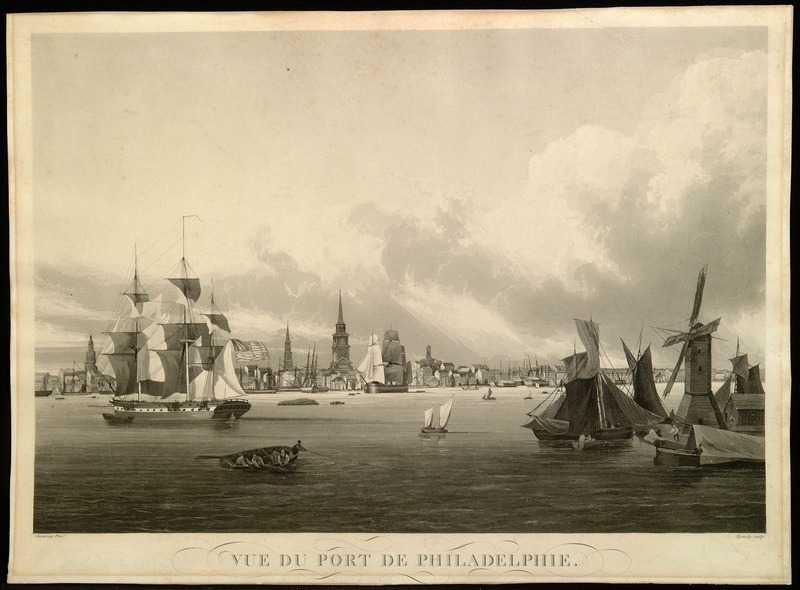 Undated view of the Port of Philadelphia.

What is indentured servitude?

Indentured servitude was prevalent in North America from the early seventeenth century but dwindled during the first decades after the Revolution. It represented one of several forms of unfree labor that colonists relied upon to support the agricultural and artisanal industries of the colonies.

An indenture was a contract that bound an individual to a master for a fixed period of time. The indentured person - woman, man, or child - would work for a specified number of years and in exchange, the master would provide them food, shelter, and occasionally some money or property as “freedom dues.”1 At the end of the contract, the individual would be released from their indenture and become a free person.2

Types of contracts found within the Record of Indentures

Click here to explore these indentures. Three types of contracts-- for indentured servants, apprentices, and redemptioners-- are recorded in the “Record of indentures of individuals bound out as apprentices, servants, etc., and of German and other redemptioners” held at APS, each quite different from the other.


How were people recruited into
contracts of indenture?

Explore the gallery to learn more about newspapers and the indenture market.

Why did people enter into contracts of indenture?

During the eighteenth century, approximately half of all migrants from Britain, Ireland, and other parts of Europe made their way to North America by way of indentured servitude. Most of these individuals traveled to America in pursuit of a better life, often out of desperate circumstances including poverty, starvation, war, and political persecution.6 Some individuals were forced into indentured servitude as a way to avoid imprisonment, as punishment for criminal acts, or, as was the case in Philadelphia, bound in childhood as apprentices by the House of Employment with or without parental approval.7

What was life like for an indentured servant or redemptioner?

Click here to explore these indentures. The path to a good life in Colonial British North America was often quite difficult for newly arrived indentured servants and redemptioners. Whether their servitude was forced or voluntary, indentured servants had very limited control over their own lives. Upon signing a contract, indentured servants were displaced from family and stripped of their rights to marry without permission, vote, or work to earn money outside of their contract for the duration of its term.8 Those forced into contracts were often subject to longer terms. Individuals who voluntarily entered into contracts of indenture, while having more control over their work and often shorter terms, still worked at the discretion of the master and their contracts could be bought and sold at any time.9

Those who were able to complete their period of indenture would be freed from the contract. They were typically given “two suits of apparel one whereof to be new” or “freedom dues” which might be goods, land, or money.10 While servitude did provide some with an opportunity to create a new and prosperous life, many servants did not find success in America. Only an estimated one out of seven indentured servants became landowners in the Delaware River Valley and many newly arrived indentured servants died from exposure to the new environment before their contract had expired.11

For apprentices, the typical story is much different. An apprentice contract was usually shorter, generally undertaken by younger individuals, involved learning a skill. It was customary for the apprentice to be supplied with the tools of the trade upon completion of their contract. Parents often consented to apprenticeships, believing that it created better opportunities for a successful life. In fact, one of the most famous Americans of the pre-Revolutionary era, Benjamin Franklin, got his start working as an apprentice to his older brother, a printer.

Indentured servants were one component of a spectrum of unfree labor in the British North America colonies. Enslaved women and men were another. This is a vitally important story distinct and separate from that of indentured servitude and apprenticeship.

While indentured servitude certainly had a major impact on the colonial population of North America, it is worth noting that Africans, whose migration was not voluntary but forced, constituted the largest number of migrants to North America during the eighteenth century. In fact, at the time of the 1771-1773 dataset, enslaved humans accounted for one of every five residents of the colonies. One highly recommended resource you may visit to learn more about racial slavery and the Transatlantic slave trade is Slave Voyages, a digital memorial and database found at https://slavevoyages.org/.

Indenture and apprenticeship were difficult ordeals. But it is important to state here, unequivocally, these miseries were not comparable in severity, degradation, or degree of inhumanity to those experienced by Africans taken by brute force to work indefinitely and against their will on another continent. Some evidence of these stark differences is visible in the Record of Indentures itself. These records define fixed terms of work and promised provisions, alongside humanizing details such as name, age, and origin, in the form of a contract that afforded some degree of legal recourse if breached by either party. By contrast, the existence of records of this kind are few to none for enslaved peoples, who were treated as nothing more than cargo aboard a vessel and recorded in the aggregate. Another element that can be traced in the Record of Indentures is racial: Servants as well as most landholders and citizens in British North America were overwhelmingly white-skinned north Europeans, while nearly all enslaved people were originally transported from Africa.12 This visible, hereditary distinction functioned as a source of isolation and prejudice, the effects of which can be glimpsed in the contracts of multiracial people in the Record of Indentures.

It is not within the scope of this exhibit to provide a comprehensive comparison of these concurrent practices. However, we welcome you to explore our bibliography to learn more.

Next Topic The Journey to Indenture